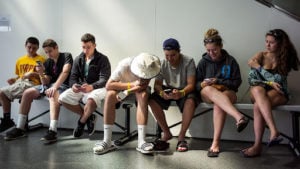 Parenting a teenager represents a challenging responsibility. Teenagers already deal with their bodies and brains trying to keep up with their raging hormones. If you throw technology into the mix, you’re bound to experience some conflicts, not the least of which deals with addiction.

We worry about our kids becoming addicted to alcohol, drugs, and other substances. But addiction doesn’t just involve ingestible substances. Addiction involves interactions among brain circuits that either nature or nurture may trigger and aggravate.

A person may suffer an addiction to a substance or a behavior. Any type of addiction represents a medical disease that will respond favorably to treatment.

What Exactly Is Smartphone Addiction?

Technological advances certainly benefit society, and the smartphone is no exception. Our smartphones replace our watches, alarm clocks, address books, and more. Many people rely on their smartphones for security or to get urgent messages. Parents feel comforted if their teenager possesses a smartphone in case of an emergency or to check in.

But when does a smartphone become an addiction? Using your phone for occasional entertainment doesn’t represent a problem. However, if your teen turns to their phone to deal with anxiety, depression, or even boredom, that may point to a smartphone addiction problem.

Many people alive today remember days when cell phones did not exist. Today’s teenagers don’t know of a world without cell phones or smartphones. For most teens in developed countries, smartphones were always part of the day-to-day routine. The recent statistics below give some insight as to why smartphone addiction became and remains a problem:

Why Are Teens Susceptible to Smartphone Addiction?

Regarding the nature versus nurture debate, both genetics and environment play a significant role in teens and smartphone addiction. For many, their DNA makes them more susceptible to addiction than others.

But when a teen lives with a parent with an addiction problem, whether it manifests through alcohol or smartphone usage, that will most likely impact their use or attitude toward the behavior or substance. Many adults of all ages also admit to obsessive or addictive behaviors when it comes to their smartphones:

It’s important to note that the smartphone represents a significant technological advancement and now holds a prominent place in society. Teens naturally view the smartphone differently than someone who remembers the only available phone bolted to the kitchen wall long before internet access existed.

Additionally, the Diagnostic Statistical Manual of Mental Disorders (DSM-5) does not officially define smartphone abuse as an addiction but as a behavior disorder. Still, the widely recognized problem with smartphone abuse is often referred to as an addiction, sometimes called nomophobia or the fear of being without one’s phone.

Though smartphone usage may represent a part of everyday life, whether you define it as a behavioral disorder or an addiction, below you’ll find some of the signs that indicate your teen may face a problem:

Smartphone addiction or abuse may also negatively impact a teenager’s mental health. Research claims smartphone usage does not cause mental health problems. But smartphone abuse instead represents a symptom that the individual already possesses mental health concerns such as depression and anxiety. However, getting back to the mind/body connection, staying awake for hours at night, checking or playing on your smartphone leads to insomnia which in turn leads to depression.

Preventing a Smartphone Addiction or Abuse Problem Concerning Your Teenager

Much of parenting involves setting a good example. If you check your smartphone constantly or let it keep you awake, you will also suffer adverse effects. Your children will also most certainly take note of your behavior and mimic it on some level.

We all thought it adorable when the toddler would babble into the play Fischer Price telephone. Smartphone abuse doesn’t carry the same novelty, and a three-year-old with a play cell phone constantly in their hand would not provide the same levity as the play phone with googly eyes.

In addition to monitoring your personal smartphone behavior, start educating your older children early about how to use a smartphone responsibly to their advantage.

First, you may want to check whether your teen’s smartphone obsession falls under cultural norms. Remember, a smartphone may also represent a tool that helps your teenager with school and social life. But, if you do see signs of abuse leading to physical, mental, or emotional health problems, consider the following:

To view the problem of smartphone addiction and abuse through a more positive lens, consider this: More than four billion people own smartphones, but only about six percent would fall under the addiction or problem behavior category. Still, if your teen displays signs of physical or mental health concerns caused or made worse by smartphone usage, you will want to address the problem promptly.